You are not connected. Please login or register
2 posters 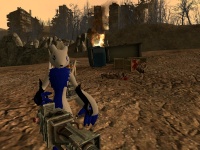 location: was in Nevada but has moved to a different location since then

general infomation:
The TFHA consists of humans,Renamons,keepers and chimeras. Known affliations our the H.A.F (Human Armed Forces) and the persidem council

i don't expect anyone to read all of that but if you did then go buy yourself a cake.